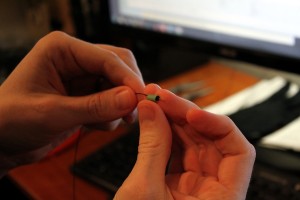 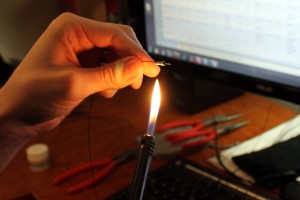 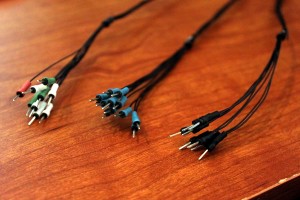 It seems that my blog is having a hard time keeping up with the latest developments. I’ll just pretend I can blame that all on the blog somehow and ignore the fact that the author may have something to do with it. Anyway, I’ve been looking into touchset possibilities based on letter frequency, using an accelerometer for mouse control (which is vastly better than what I originally had in mind), and trying to streamline the sensor attachment process. This post will be about the sensors; the other items will have to wait until later.

After I found a good conductive fabric to use for sensors, I set about preparing the sensor lead wires to be attached to the material. While I don’t currently have enough material to do all of the sensors, I still have all of my lead wires from back when I was trying to use copper foil tape. Obviously, I had to cut all of the foil squares off the ends of the wire, which meant I needed to strip another 1/8 inch of insulation off the ends of all 34 wires. Additionally, the wires don’t do so well all by themselves being stuck into the Arduino board female I/O header, so I stripped the other end as well and soldered header pins onto all of them.

Finally, I needed a way to somehow identify the tail end of each sensor lead, so I wouldn’t have to deal with 34 nondescript black wire ends and try to figure out the hard way which one went to which sensor. So, I cut small sections of different colors of heat shrink tubing and secured them around the back side of each of the header pins. The front finger segments are black (12), the side finger segments are blue (12), the thumb pads are red (2), the fingernails and thumbnail are white (5), and the large palm strips are green (3). I will still have to determine which is which among the sets, but at least it will be much easier. Also, for the finished product, the leads should be soldered directly to the controller board. I am only using this header pin approach for prototyping. It makes things much, much simpler visually and physically—not to mention the fact that it makes it easy to rearrange I/O pin assignments without the hassle of re-soldering. 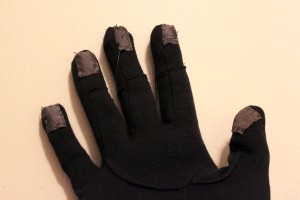 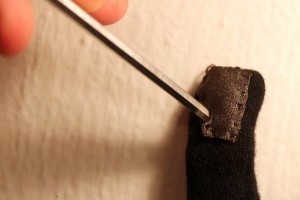 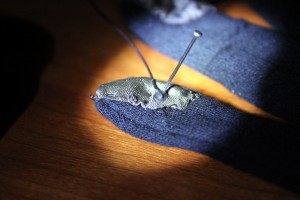 After I got the wire leads all prepared, I cut five pads from the small amount of material I currently have: one for the thumb pad, and four for the top finger pads. I figured that would make for the easiest testing environment. My wonderful fabrically-unchallenged wife sewed the first two pads on to show me how, and then I took over for the last three. It took me 45 minutes to do it, but I got them on eventually, and I’m happy with how it looks and feels.

The thing about sewing something onto a glove is that it is much easier if the glove is in the correct shape—namely, your hand is in it. This is a challenge because this leaves you only one hand with which to sew. It’s an even greater challenge in this case because I’m right-handed, so naturally I’m building a glove for my right hand…so therefore I am left with only my left hand to sew with. Quite challenging indeed. Fortunately, the stitches required to attach the pads are not complicated, and can even be completed with a non-dominant hand if you have enough patience.

The basic approach to sewing the sensors on with one hand in the glove is that you start each stitch going straight down, then stop when you feel the needle poke your finger, then continue laterally under both the sensor fabric and the glove fabric for a quarter inch or so, then come straight back up. If you don’t go straight in or come straight back up (as much as possible, anyway), then you risk having the sensor material shift to one side slightly when your stitches become tight. This isn’t always a terrible thing, but if you want a lot of precision in sensor alignment, it’s good to keep it in mind.

I have also found that it is much easier to attach all of the wires first, and then sew the sensors on. The pictures above show the process involved in attaching the sensor wires after being sewed, and it is definitely harder than sewing sensors with wires already attached. It works best to have all of the wires coming off of the same corner of every sensor, and for my purposes, I’ve chosen the bottom left corner as shown in the photos. Since you can’t very well sew through epoxy, this corner remains relatively unsecured (though the rest of the stitches keep the sensor in place well enough). Using this unsecured corner, it is possible to apply wire glue and then epoxy to attach a wire lead if necessary. The three sensors I sewed here followed that process, but it was not easy by any means. Having a wire attached makes it harder to sew, but it is still easier to do this than to attach the wire afterwards.

One other note: although it isn’t shown in these pictures, it is much simpler to sew the sensors on if you pin them down (literally) with two pins to keep them from moving much once you have them in the correct position on the glove. This virtually eliminates any extra difficulty from the wires being attached already. 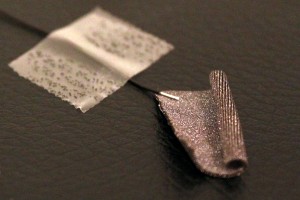 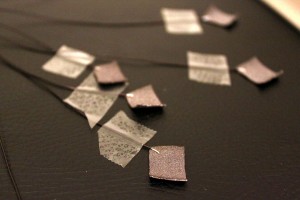 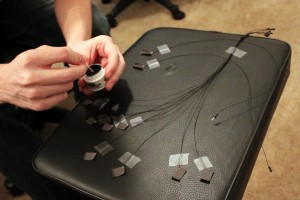 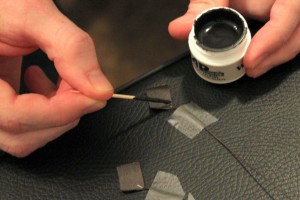 After I got the first five sensors sewed on and create the proof-of-concept video, I set about getting the rest of them done. I’ve ordered more of the conductive fabric, though I don’t expect it to show up for a few days, but even just the sample that I got last week has enough to do a few more than the five already done. So, I cut out enough material to do the middle and lower finger pads (B/C/E/F/H/I/K/L according to my diagram), and tried to figure out a good way to attach the lead wires all at once.

One of the difficulties in using wire glue, since it isn’t really all that sticky, is that the unless the wires are positioned exactly in the right spot, they can move easily and create a sub-standard joint (or worse, come out of the glue completely). What I did to fix this problem was use regular sticky tape to secure each wire lead onto a flat surface (I used a piano bench), and then positioned each piece of sensor fabric underneath the ends of the wires. It looks a little funny, but it really works.

Once the wires are in place, it’s easy to apply a small dot of wire glue to each connection. Once it dries (less than an hour, but I let it sit for a couple of hours to be safe since I had somewhere to go that evening), mix up a small batch of epoxy and apply a small bead to the area where the wire glue is. It’s a good idea to get the epoxy to go slightly beyond the wire glue area, since that will let the epoxy hold the entire joint securely to the fabric. If it is only on top of the wire glue, then the wire glue is still the only thing effectively holding the wire to the material, and there isn’t a lot of added strength.

Once again, note the orientation of each bit of sensor material. First of all, the wires are all attached to the concave side (so the material shows a slight tendency to curl up around the wire). This makes it a little easier to mount each sensor to the glove. I believe the conductivity is roughly the same for each side, though I didn’t test to the resistance specifically. I have taken to calling the concave side the “back” of the material, and the convex side the “front.” Also note that since we’re attaching the wires to the back, they should go on the top left (or bottom right) of each sensor. This means that once we flip each sensor over and attach it to the glove, the wire lead can be coming out of the bottom left corner of the sensor. This seems to make the most sense to me, though if you have a reason to do it the other way, it is of course your decision to make.

I still need to sew the rest of these sensors on, now that they have wire leads attached. Hopefully it won’t take too long. I’ve found that I can do the sewing at the same time as watching a series of Doctor Who episodes. The two tasks go together quite nicely, really.