The basic concept of the Keyglove is to generate keypress codes by touching unique combinations of conductive sensors together. These sensors are mounted on the fingers and palm of the glove in strategic places to allow for the greatest possible number of combinations. Some of these combinations are more physically difficult than others, and so these are intended to be used much less frequently or even not at all. The glove also has an accelerometer on the back, which will be used (where applicable) to control mouse movements. Although this capability is still under development, the concept is to have a particular “mouse-on” touch combination, which will then start watching the multi-axis tilt of your hand (relative from the position it was enabled at) and then translate that into mouse cursor movements. Mouse clicks will be accomplished by other unique touch combinations. 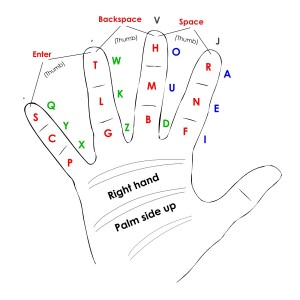 Using simple one-to-one sensor combinations (made by touching one sensor to only one other sensor), there are 60 ergonomically easy possibilities. Examples of such combinations are the thumb tip to each of the finger tips, and the thumb tip to each middle and lower finger segment. The touchset shown in the diagram on the right is simply one of many possible arrangements. This one has been arranged with a great deal of thought to maximize speed for typical English-language text entry. The letters shown are generated by touching those sensors with the tip of the thumb.

For a page that contains a full table of all of the base combinations, along with diagrams and pictures of my hand in each combination, visit the currently very basic Training page. This page will become more complete in the future. Just to clarify about the diagrams on the Training page: the sensor labels don’t represent the actual letters (or numbers) that would be typed by using each sensor. They are merely there for programmatic and visual reference. Since keys are “pressed” by touching multiple sensors together, there must be some way to define which sensor is which. For example, the top thumb pad is “Y” and the index fingertip pad is “A”. The sensor combination “AY” indicates touching those two sensors together. “ADY” would be the thumb pad touching both the index and middle tip pads.

In the finished product, you will be able to use software to customize exactly what you want each touch combination to represent, according to your preference. The easiest combination, “AY”, might be used to type the letter “E” for example, since it is so common.

Once you allow even just two-to-one combinations as well, the number of possibilities skyrockets. There are many hundreds of unique combinations. Obviously not all of these should necessarily be used, but it does allow for a great deal of flexibility. Click on the image on the right for more detail on the glove sensor placement. The 34 sensors are placed in the following locations:

Since some sensors will be unintentionally connected while executing some combinations, the software will take care of precedence settings to control which connections are ignored under certain circumstances. Additionally, a sensitivity threshold can be adjusted to control how long the sensors must be touched together to be considered intentional. Depending on your dexterity and desired speed, this can be anywhere from a few milliseconds to a whole second.

Technically, there are enough combinations to have designated modifier positions (for Shift, Control, and Alt). Whether these are ergonomically feasible enough to allow simultaneous presses of the other desired keys remains to be seen (e.g. Shift+A, Shift+4, etc.). The controller software will have a “modifier-lock” function which will at least be optional for those who wish to use it instead of the simultaneous held combinations.

I have no simple configuration software available at this time, but it is my intention to create a very basic glove programmer application and training program to help instill the muscle memory required to efficiently use the glove. Although the implementation is very different, the process is virtually identical to learning how to touch type on a regular keyboard. It will only require time enough to learn it well. The glove is programmable as much as possible to allow for unique applications, even potentially outside the standard English/ASCII character set.