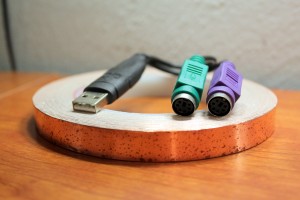 Both the active PS/2-to-USB adapter and the adhesive copper foil tape I was waiting on arrived in the mail today, so naturally I wanted to test both. The PS/2 adapter has proven to be exactly what I needed, and I am very happy to say that the PS/2 code I wrote works virtually perfectly! There is still a little inefficiency I’d like to address—using interrupts instead of polling—but it basically works. All of the controller code, including the PS/2 keyboard library, is available in the Google Code project repository.

The next step in the test process is to attach the sensors to the gloves. The copper foil looks like it will work great, especially because it is very thin (more than I thought it would be). Aside from being a little bit sharp on the edges, it’s also easy to work with. The only downside is that I’m sure the adhesive won’t stick reliably to the glove surface all by itself. But I figured that would happen, which is why I planned to use epoxy to glue the pads on from the very beginning.

Note that the odd spots on the tape in the picture above are only present on the outermost layer. After I unwound one full length of the tape, the spots disappeared (visible in the picture below). I assume it is some kind of tarnishing, but I don’t know what caused it or whether it inhibits conductivity in any way. The tape arrived in a sealed plastic bag.

Anyway, before I attach the sensors to the glove, I’m going to solder all of the sensor wires on first. I think it will be easier to do this before they are on the fabrig. I’m not totally sure about heat transfer, but since it is thin metal foil, I’d imagine I might damage the 100% cotton material with the soldering iron heat unless I’m very careful (and maybe even if I am). So, soldering first, then attaching.

However, I did cut out the sensor pads from the roll of foil tape. I’ve guessed on the sizes, but I think what I’ve got should be usable. It’s a total of 34 sensors: 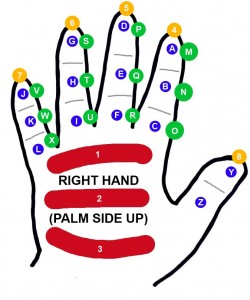 This translates into exactly 20″ of tape for an entire set of sensors. At $22.40 for a 36-yard roll, that means the stuff costs about 1.728 cents per inch, which means the entire sensor array costs a mere 35 cents. Awesome! I may find that my size estimates aren’t quite right for ergonomic reasons, but that remains to be seen. Any adjustments certainly won’t significantly impact the cost.

Soon, I should be able to put up a photo of the glove as it actually will look, instead of one with weird photoshopped dots on it. Until then, here’s what the sensors look like in their current form: 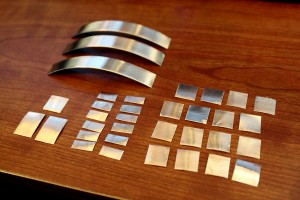