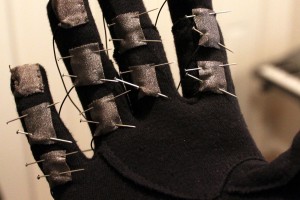 My glove is almost all built! I don’t have a touchset defined yet, but that’s all software and I’m mostly focusing on hardware at the moment, which is definitely the hard part for me. And, in fairness, this is all keyboard and no mouse so far. I have barely touched the accelerometer that arrived today.

Back to the most recent success: even though the full order of conductive fabric didn’t arrive until this afternoon, I was able to cut and attach every piece of sensor material except for the three large palm ones using what I had left over from the small sample I got for testing. I’ve gotten a little better at sewing with only one hand, helped in no small part by the use of pins (visible in the first photo here). If I don’t run into a “tangled thread” situation, I can do one sensor now in less than five minutes. This makes for an average full-glove sensor attachment time of roughly four hours. 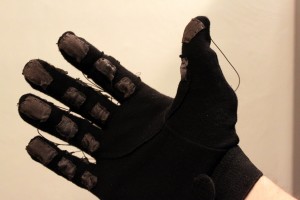 After I got everything attached, I set about separating the sensor lead wires into bundles organized by finger. They had been loosely tied according to sensor type (e.g. fingernails, finger pads, finger sides, etc.), but this turned out to be not very logical anywhere except at the I/O header, which is the easiest element to deal with in this whole apparatus. The thumb has three, and the other four fingers have seven each (one nail, three pads, and three sides). 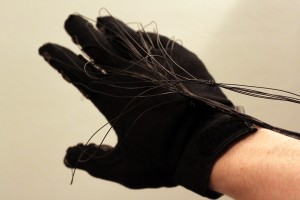 Even separated and regrouped by finger, the wires here are very messy. This is due in part to the fact that it’s solid, even though it is quite thin (26 AWG). It still has enough resistance to keep most of its shape against the force of gravity. As you can see in the third photo, with 34 sensor wires, this creates a huge inconvenient mass of wires—without any extra work, anyway. 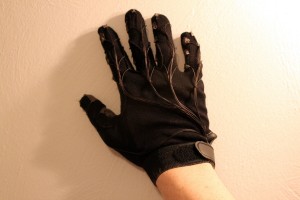 The solution to this problem is to secure the wires to their logical paths tight up against the glove. I was originally planning to use epoxy glue beads because it was easy, but it’s also impossible to undo easily. Because of my newfound ability to sew (sort of), I changed my mind and opted to use little loops of thread instead. This resulted in a glove that looks almost exactly how I originally imagined it way back (three weeks ago) when I was mulling over the idea in my head. Awesome! 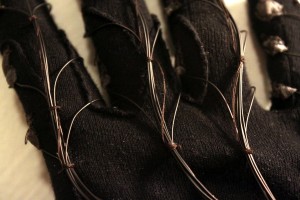 The only thing I am a little worried about is that my technique for sewing the loops is inadequate. I am worried that they might somehow come undone, and while that wouldn’t be a huge problem, it would certainly be inconvenient. I think I might have to look up some info online for tips on how to more effectively do that kind of simple thread-based tying job. However, it really did turn out quite well—at least as good as I hoped it would. 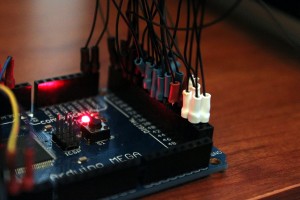 As soon as I got all of the wires secured and re-bundled, I plugged all of the sensor pins into their respective spots on the I/O header as fast as I could. To my dismay, that ended up being a lot harder than I thought it would because of an practical oversight on my part back when I was trying to be clever by adding colored head shrink to the sensor lead pins. Colored heat shrink for sensor categories is a great idea, but my execution of it was wrong. I had the heat shrink wrapped around the plastic part of the header pin as well as the metal, which effectively adds at least 1mm of width to every header pin.

Each pin doesn’t have a lot of extra room as it is, and adding that much extra makes for a very crowded I/O header. So crowded, in fact, that some of the pins just wouldn’t go in at all. The crowding affect builds up as more pins pile up against each other. I had to take a knife and cut off some of the heat shrink on some of them to get them in. I even cut off the very last pin entirely and just stripped the wire and stuck it in directly.

Naturally, my next immediate desire (at 1:30am) was to try touching each possible combination of sensors together to see how easy or hard each one was. I had already been doing this a little in my quest to find which pin belonged in which hole, but it was quite gratifying to go through all of them and just watch it all work like I imagined it would. However, I will also add here that testing each sensor combination—and, in fact, going through the whole glove-building process—has brought to light quite a few changes that would (will) make in building a second glove. I will get into that in another post shortly.