If you want the short version, here it is: unfortunately, I haven’t found a good way to use conductive glue yet, either for sensors or for sensor wire attachment. For more info, read on. 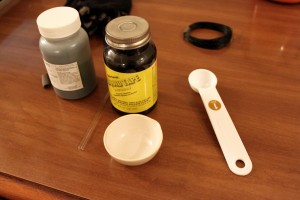 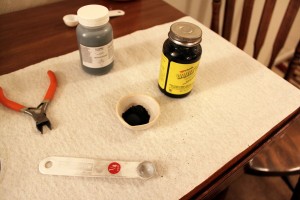 I’ve been occupied with all kinds of stuff for the last couple of weeks, which has made it difficult to keep up with posting new blog posts here. However, the project hasn’t been entirely dormant; as promised, I finally got the last of the conductive glue ingredients (carbon graphite powder), and I’ve tried a few different mixes to see what would happen. For reference, I started using the instructions and recipe here.

The first thing I noticed when trying to prepare the glue is that the graphite powder is extremely messy if you are not extraordinarily careful with it. It’s about as bad as laser toner, if you’ve ever messed with that. The powder is extremely fine and tends to “spray” all over the place, almost as if a pile of the stuff has some elastic properties. This was most noticeable when I dipped the measuring spoon into the container and tried to scrape off the excess. It ended up creating a nice scattered blanket of black powder all over the paper towel I used as a workspace cover.

I tried to measure the correct amounts of graphite and Liquid Tape, and immediately after I started stirring them together, I had doubts about whether I added enough Liquid Tape. It just seemed too dry. However, I have the same doubts every time I add a tiny amount of milk to a rice seasoning mix when I’m cooking (which is not often), so I guess I should just learn to trust the recipe. After I mixed it around for about 15 seconds, it really started to become a homogeneous paste, almost the consistency of cake frosting but nowhere near as tasty. (No, I didn’t try eating it.) 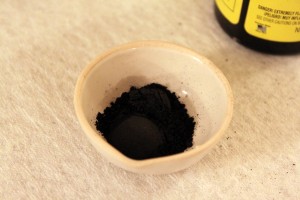 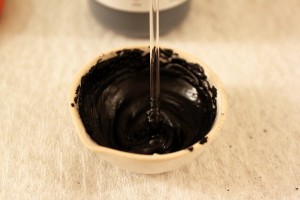 As you can tell from the photos, I used a ceramic evaporation dish and a small glass stirring rod to mix everything up. These materials were easy to get from Amazon and eBay, and I knew they would work even with harsh chemicals. Applying the newly mixed glue paste with the glass rod was a little bit of a challenge though. It’s kind of like buttering a piece of bread with a fork instead of a knife—you just get the feeling there has to be a better tool. Even so, it did get the job done, though the glue paste was very sticky. I tried a few different tests for comparison: (1) an entire sensor made from the glue mix, (2) attaching a sensor wire to conductive fabric using the glue mix, and (3) attaching a sensor wire to conductive fabric using pure Liquid Tape. Then I set the glove down to dry and then spent the evening doing something else for a couple of hours.

A note about cleaning: the carbon graphite powder is incredibly fine (it’s actually used for lubrication in some applications). Just try not to get it on anything you don’t want it on or you can’t throw away. It’s virtually impossible to remove it completely. The Liquid Tape is a nasty black goo, but it cleans up well enough with different solvents. You can use paint thinner if you want, but I used regular rubbing alcohol and a lot of pressure. It eventually came entirely off of the ceramic dish, glass rod, and my fingers. 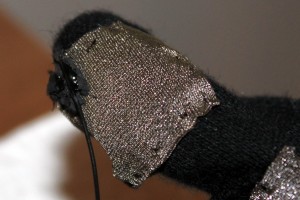 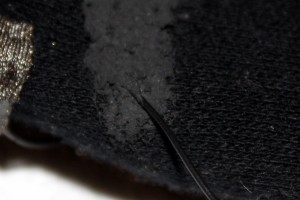 After the glove had a chance to dry, I tried testing the conductivity of each of the three test scenarios. The conductive glue mix was electrically suitable both for attaching wires to other material and for touching two pieces of glue together (i.e. as sensor material, not just wire attachment material). However, it is physically unsuitable for two reasons: it becomes hard and crusty when it dries, and it doesn’t hold wires inside very well. In order to be really useful and well-suited to the task, it needs to be smooth and flexible after drying, and it needs to hold wires reasonably well. If a wire can become detached without a tremendous amount of force, then it’s a serious point of failure, especially when there is no good way to re-attach a sensor wire. Another significant problem is that the conductive glue in hardened form does not work well when used on a capacitive touch screen. This is a key benefit of using conductive fabric, since it is likely that a glove like this will be used in the context of a mobile device more often than not.

The pure Liquid Tape sensor wire attachment looked and felt nice enough (smooth and flexible), but was unfortunately not conductive. I didn’t really expect that it would be, since Liquid Tape is sold as an insulator, but I figured I would give it a try anyway. No luck there. Additionally, it’s not designed to hold things tightly, so it wasn’t that difficult to simply pull the wire out.

I tried again later with a different mix, that time using less graphite than Liquid Tape (probably 0.75:1 ratio). For logic signal detection, it’s okay if I have a few hundred ohms of resistance, since the connection can still be detected. I also mixed a much smaller quantity, since during the first test I ended up with at least five times as much as I needed. I tried the same tests, and found something that essentially performed the same as before electrically, but was only slightly better physically. The glue dried a little less hard and crusty, but nothing at all like the conductive fabric. It wasn’t really flexible, and still didn’t work at all with capacitive touch screens. 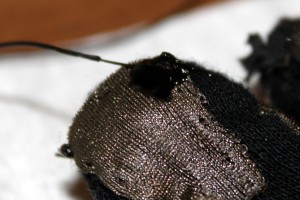 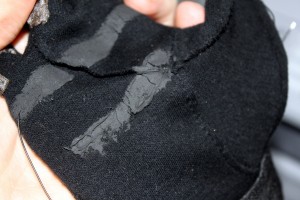 A couple of days later, after a stop by the hardware store, I tried another mix (Mix #4 from this page, a follow-up Instructable from the author of the first one linked above). This one used DAP contact cement instead of Liquid Tape. In short, this ended up being yet more flexible after drying, but was not notably better than the first two experiments above. In addition, DAP contact cement smells awful and retains some bad odor even after drying. This mix still didn’t come anywhere near the look, feel, or effectiveness of the conductive fabric. Interestingly though, it did perform a little better than the two previous experiments when testing with a capacitive touch screen. Still nothing like the fabric, but better.

So, I’m still looking for different alternatives. In the mean time, I think I am going to keep the conductive fabric approach for testing and work on the controller software for a little while. If I have any new hardware approach ideas, I’ll be sure to give them a shot though.