Prototype B is Imminent

Ever since I was able to actually type some stuff in Microsoft Word using the Keyglove—albeit very slowly and methodically, and only through the use of a makeshift serial translator program in VB and the use of the SendKeys() function—I’ve been increasingly eager to finish this glove prototype as quickly as possible. Granted, “etaoinsrhdlucwvmgkfpxybqjz” is not very impressive, but it’s one of each letter of the alphabet, and it came right out of my fingers without a keyboard. Pretty awesome, really. 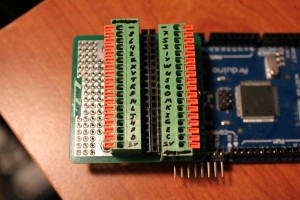 The first thing I’ve finished that will make Prototype B a reality is the quick connect breakout board. The Arduino Mega is a great board by itself, but when you’re working with multiple test gloves, each of which has up to 34 unique sensor connections on it, constantly cutting, soldering, and heat-shrinking new header pins on every wire for every set of sensor leads can get really tedious. This board uses a couple rows of spring terminals designed for high-gauge wire to eliminate the need for soldering (and managing) header pins for each new glove attempt. Additionally, I’ve labeled each terminal as shown in the photo so that it’s immediately obvious which hole is for which sensor. No more testing every connection with the serial debug output!

I built the board using a basic 2″x2″ ProtoBoard, some stackable headers, and spring terminals (all from SparkFun). I had to use a very sharp knife and a little ingenuity to connect the spring terminals together to make rows of 18 pins, since they came in blocks of six. They actually stack together horizontally very nicely, and it was fortunate for me that I needed 18 and they came in an even factor of that number. The only downside to the board construction is that it inevitably covers five of the existing header pins on the Mega board, most of which are important. One of them is the “B” sensor input, and two are the I2C DATA and CLOCK pins (used for the accelerometer). To solve this problem, I just stuck an 8-pin 90-degree header in so I can still get to everything I need. 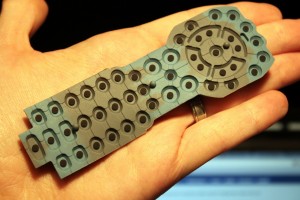 The second thing I’ve managed is a successful experiment using the conductive rubber keypad contacts from a cheap TV remote. The remote uses a very small (1/8-inch diameter) contact to short each pad on the main remote circuit board, and the material on this contact has great conductivity. Using a small knife, I cut a couple of the pads off the main keypad and tested them for suitability, first touching the pad to a fabric sensor, and then touching two pads together. Both times, the sensitivity and conductivity were excellent. 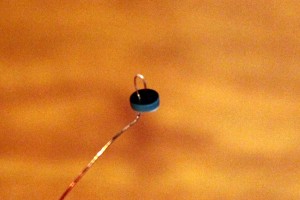 Since the “target” sensors on the glove don’t need to be large (as discussed in the solution to Problem #3 listed in this post), these pads should work fine as sensors even though they are as small as they are. I’ve got some cheap for-parts remotes on order from eBay now for further testing, but for the moment I’m going ahead with these pads.

As you might be able to tell in the photo here, I’ve also switched to using enameled magnet wire for sensor leads. The stranded stuff had great flexibility, but the very nature of the many tiny stranded wires made it too difficult to work with for actual attachment to the sensors. So, to achieve a good compromise between size, flexibility, and stiffness, I’ve switched to 28 AWG magnet wire. It’s cheap, and it even looks cool. It’s thin enough not to be noticeably stiff, and it’s thick enough (and solid enough) to exhibit the right properties for sensor attachment—specifically, the ability to be poked through both the sensor fabric and the glove fabric. More importantly, as shown in the photo, I can poke the wire straight through these tiny conductive pads, bend it back, poke it through again, and pull it tight against the surface to create an instant and reliable electrical sensor attachment. With a bit of glue on the back, this is a remarkably durable way to do it. It sure is a lot easier than homemade conductive glue. 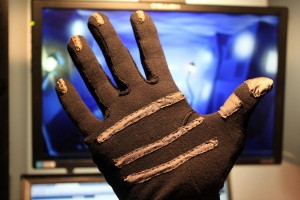 So, now I have a glove that is missing only the small sensors, but it has all the rest of them attached. I’ve decided to try using the conductive fabric for the large sensors (thumb, fingertips and palm), and also to quit taking shortcuts and just sew them on. Sewing them on undoubtedly takes time, but after all of my recent experiments with other materials and methods of attachment, nothing comes close to the result I am able to achieve using needle and thread. It looks good, feels good, and it holds nicely. There may be better ways to do it, but so far, I haven’t discovered them, and that’s certainly not for lack of trying. I was extra proud of myself for this one because this is the first prototype glove out of all my attempts that I actually got the palm sensors applied and/or attached with any kind of success. I’m really happy with how this has turned out so far. 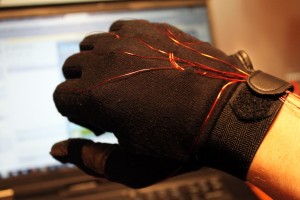 Finally, I’ve got the sensor leads attached to all of the sewn sensors currently on the glove (four fingertips, two on the thumb, and three on the palm). The tail ends of these leads are pretty messy at the moment, but I’ve actually been able to keep the sensor ends organized well by weaving the wire itself directly into the glove fabric. I might need to add a few thread ties here and there, but I’ll wait to make that decision until I have the rest of the sensors attached. I hope to get that done by this weekend; if I can, I should be able to get a video up demonstrating all of the glove’s sensors and a little bit of real typing.

After that…who knows! Once I iron out the kinks in the mouse control and finish up the HID interface methods, maybe Keyglove kits will be coming soon!