I’ve spent a good deal of time lately completely rearranging the Keyglove controller code into a whole bunch of logically separated modular units to make everything more manageable. I know there is still plenty more code to write before all of the desired features are working, but even without that code it was becoming difficult to navigate and edit efficiently. When I brought the LUFA library into things and wrapped it around the existing Arduino sketch, I knew I had to do something drastic. So, here’s an overview of the changes.

I used Gliffy to create a quick flowchart that represents the new program flow structure, which is now very easy to follow with visually if you look at the main keyglove.pde sketch: 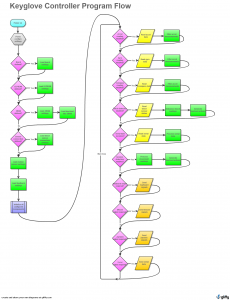 These changes have resulted in code that is significantly easier to understand and edit. Each hardware or software feature is controlled by a #define directive, so that no matter what your particular Keyglove hardware looks like, you can set the configuration to match, and the compiler will take care of the rest. Using an Arduino Mega? Great. Using a Teensy++ 2.0 board instead? That has its own option. Using the WT12 Bluetooth module, or the USB connector? Those have options too. Using the ADXL345 accelerometer, or the ITG-3200 gyroscope, or the combined MPU-6050 chip? Each has its own option.

This also makes it very easy to write some new code to support a new sensor for testing purposes without actually changing any old code. If the new method works, switching is as easy as using a new #defined option, while if it doesn’t, then I can revert back to the old methods in a second.

Another major advancement that I’ve made is been learning and implementing Dean Camera’s amazing LUFA framework. This has required learning more about how to write AVR-GCC code, not just Arduino code. Fortunately, for my needs so far, I haven’t needed to learn a lot of the more complicated parts of the AVR functionality, like timers and interrupts. I will have to, I know, but I’m confident that I’ll be able to progressively as the code grows and each new functional need becomes apparent.

The motivation for making this change is two-fold: first, I want to have code that is entirely open-source. The Teensy is amazing, but the bootloader is proprietary, with no indication that will change in the near future. The LUFA project is released under the MIT license, the same as the rest of the Keyglove code. Along these same lines, I’d also rather not tie people into necessarily using the Arduino IDE and/or libraries when the underlying hardware (Atmel AVR AT90USB) can do more than that. Using the Teensyduino add-on isn’t hard with the Teensy, but allowing the whole process to be done via command line and avr-gcc and avrdude is a good feature for anyone likely to want to actually modify the officially published Keyglove code.

Secondly, I wanted to have complete control over the USB functionality of the device. While the most convenient usage of the Keyglove will be wireless, there are many good use cases that involve a USB connection, the most common of which will involve charging and reprogramming. The Teensy’s USB device capabilities currently include keyboard, mouse, and a very recently added joystick capability. It can also enumerate as a virtual serial port. However, I want all four of these things at the same time: serial, keyboard, mouse, and joystick. The Teensy doesn’t do this without internal library modifications.

Strictly speaking, most of the special application of LUFA code that is now powering the prototype Keyglove has required the same modifications that the Teensy code would have, so the LUFA approach probably wasn’t really that much easier. However, by using LUFA instead, I’ve been able to write something all under the MIT license from the ground up instead of modifying an intermediate layer built on top of something proprietary.

Plus, the experience of discovering intricacies of the USB protocol and the HID interface specifications has been amazing. I’ve been able to learn a ton.

The Arduino language makes certain things much simpler than they would be in plain AVR-GCC code. Although I don’t want to be tied to the Arduino IDE and libraries, I don’t mind using the language and functions when they make things easier, and I also wanted to avoid “porting” all of my Arduino code into a different codebase that would compile with LUFA. But LUFA doesn’t have all of the Arduino’s libraries! What to do? Create a wrapper, of course!

Now, before you ask: yes, I am aware of the LUFAduino project by the people over at Micropendous. However, their library appears to be built on top of a lot of their other code, and it includes functionality I don’t need, as well as not everything I do need. I wanted a single source/header file set that I could basically drop into a stock LUFA distribution and have it support the basic Arduino functions I need—essentially, digital I/O pin support, USB serial, USB keyboard, USB mouse, USB joystick, I2C, and SPI support. A lot of it is actually working pretty well already. The USB virtual serial, I2C, and SPI support all need work, but so far, the lack of progress has been more a matter of time rather than difficulty. It’s coming along well so far, but I’ll probably need to become a little more familiar with those pesky timers and interrupts to finish the job.

The Keyglove code is up on GitHub for anyone interested in checking it out, contributing, using the ArduinoWrapper code, etc.