I’ve been back from Maker Faire NYC 2011 for about three weeks now, so it’s really past time for me to write a blog post about the experience. I’ve got five other topics I’d like to write posts about too, but I like to keep things at least roughly in chronological order, so this one comes first. 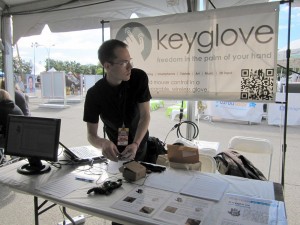 Some of you may already know that I did write a pretty detailed summary of the event as a Kickstarter Project Update, and you’re more than welcome to read that if you haven’t already. The audience for Kickstarter updates is mostly different from the main project website audience, so there’s always a bit of a struggle on my part about whether to post something in only one place, or whether to duplicate it, or whether to say different things about the same topic on each site. That last option is what I usually end up doing.

Rather than restate everything I wrote on Kickstarter, I’ll just give you the general summary:

1. We got sick right before the weekend, and only stayed one day instead of two.

This was a disappointment. We had a great exhibit location—right in the middle of the Arduino tent!—but since we were outdoors and near some noisy stuff, I got to pretty much shout all day while answering questions and describing the Keyglove. This, on top of an established head cold, left me with absolutely no voice by the end of the first day. Not even Tylenol and DayQuil could fix that. I figured it would be dumb to spend the whole next day frantically yelling at people who would probably not be able to understand me anyway, so we packed up Sunday morning.

2. The 6DOF motion sensor module on the working prototype I brought stopped working.

Seriously? I mean, come on! Of course this would happen right before everyone started streaming into the gates. It was working the night before when I tested it. That module has since proven to be a little bit temperamental whenever I connected it to the I2C bus for testing, so I suspect some kind of electrical failure, but I don’t really know. I really should have had more spare parts with me, even though I was still so busy the entire day that I probably wouldn’t have been able to fix it anyway.

3. Hundreds of people got to see and play with the Keyglove.

Even as limited as the half-working prototype was, pretty much everyone was interested or impressed at some level, and most people seemed pretty excited at the prospects of what such a device can do. If only I’d been able to demo everything I have in mind…maybe next time though.

4. Maker Faire was and is still awesome.

All the friendly people, amazing technology, and fantastic creativity get bundled up into an unforgettable experience. It’s like Disneyland for geeks. I will definitely be returning to the next Maker Faire I can fit into my schedule. I didn’t get to see as much of it as I would have liked to, and I’ve never been an exhibitor before, but it’s great on either side of the table. I did get to meet Adam and Matthew from Wayne and Layne though, along with a couple other people who have helped me with the Keyglove project in various ways.

You can see the full set of 38 photos here if you want to check them out.