Diving Back In, and Google Glass Plans

The last seven months have been somewhat of an unplanned hiatus from the Keyglove project. As I mentioned in my last Kickstarter project update as well as a bit later in a post on my personal blog, my position at Bluegiga has been taking virtually all of my time. There is a lot more travel, and some odd hours due to the global nature of the business and the kind of support I need to do. This has been getting better over time though—the odd hours part, anyway—and I am absolutely determined to get back into working on the project, for a few reasons.

For one thing, I have now passed the two-year anniversary of the successful Kickstarter campaign. It was one week ago today, in fact: April 27. That is a tremendously long time to wait, for all those of you who backed the project. I am continually encouraged by the ongoing support, and conversely by the conspicuous lack of impatience displayed despite the long, drawn-out development process and the painfully long silences at times (like over the last many months). I want to work on this project, and I want to do it now. This by itself is motivating.

For another thing, although I haven’t had much time to work on the Keyglove, I have still found myself thinking about it quite often and at times doing what could be accurately called brainstorming. Some of the ideas I’ve had should prove to be fruitful once I immerse myself in development again. A corresponding observation to this point is that I think it will be beneficial for me to begin again with the codebase and designs I already have, but with a relatively fresh viewpoint. It will be easy for me to objectively evaluate the systems I have already built and look for any areas which may benefit from certain changes or a re-imagined approach. This kind of analysis is easier to do when you haven’t been neck deep in the project for a while.

Third, there has been quite a bit of relevant innovation in the areas of wearable computing, wireless connectivity, battery technology, and low-power programmable microcontroller systems. Might it be worthwhile to incorporate an Arduino compatible ARM processor instead of the AT90USB MCU I have? Possibly. Bluetooth Low Energy for wireless comms? Very likely, at least as an option. Flexible PCBs? Maybe. New, tiny motion sensor? Sounds great. Bundling everything into a single FPGA? It could be done. The bottom line here is that six or seven months on the embedded system design timescale is significant. There is a lot that has happened in the world since then.

Perhaps the most personally exciting reason for me though is this: 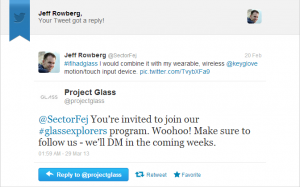 I managed to snag a slot on the new Google Glass Explorers group as part of the #ifihadglass contest that Google put on back in February. I am definitely more excited about this than is healthy for someone as far down the list of early adopters as I am (though I am still thankful that I’m on the list in the first place). My entry tweet was about combining it with the Keyglove, and their reply came a little over a month later. I was (and am) ecstatic.

As it happens, I actually got to try a Glass device back towards the end of January of this year, while having dinner in San Francisco with a friend from college who is now way high up on the Glass development team. It was a pretty short demo, but I was completely enamored. Truth be told, I’d actually had a dream the night before about what it might be like, in subconscious anticipation of that eventuality. I truly can hardly wait for until my turn comes to get a development unit. This is exactly the platform for which I originally created the Keyglove. I don’t know when I will get mine, but I want the Keyglove to be ready to take full advantage of the opportunity.

In my opinion (and others’), Google Glass has tremendous potential. Augmented reality and instant contextual information has a value that we can’t accurately quantify yet. We don’t have enough data to predict with. Glass will allow innovative people to expand the range of possibilities, to give us ideas about things we will find invaluable which today we can’t even imagine since we don’t have a mental framework to put them on. I want the Keyglove to be right there along side this discovery process, solving the input challenge where Glass so (comparatively) eloquently solves the output/display problem of wearable technology.

So, while I’m waiting for Glass…what’s next?

I need to run through the Roadmap again and freshen things up a bit. Then I need to try compiling the last code snapshot I have and see exactly where I left things at the end of September. Then, I will read through the modular code structure I have and see if there are any structural changes to make right off the bat, or if I should go straight to fixing bugs and adding or completing features.

Begone, distractions! I have work to do!